The Hamsa Evil eye is a symbol that is very important in the religious beliefs as well as in the culture of the Jewish society. It is commonly created in a shape of a hand having five fingers outstretched. The word Hamsa (Hansa in Sanskrit, or Al Khamsa in Arabic) means five. It is a significant symbol in ancient times in the land of the Middle East.

Currently, the new generation considered the Hamsa evil eye as a symbol of confidence, protection as well as bravery. 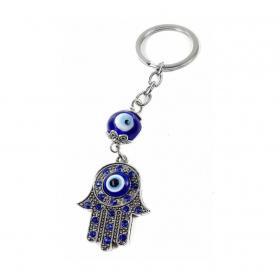 It is used to denote the Five Pillars of Islam which consist of Hajj (visit Mecca once by anyone financially as well as physically to complete the journey), the Salat (pray 5 times every day), the Sawm (self-control throughout Ramadan), the Shahadah (accepting Muhammad as God’s prophet, as well as the Zakat (give to the needy.) In some instances, the Hamsa evil eye is also believed as the hand of Fatima, in honor of the daughter of Muhammad which is Fatima Zahra.

Hamsa evil eye for the Christianity 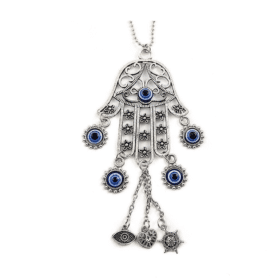 In Roman Catholicism, the Hamsa has a meaning in relation to the Virgin Mary. For Christians, it signifies power, femininity, as well as strength. It is designed with a Jesus fish symbol. The fish symbol is a significant sign for Christians. In the culture and religious beliefs in Christianity, the addition of the fish of Jesus is believed to be strong protection from the evil eye. It is believed as effective protection for the family member against individuals who have ill will and evil in nature. In addition to this, it is also believed to be a sign of fortune as well as good luck for people. To sum it up, the Christian community widely uses it as a sign of protection.

Hamsa evil eye for the Judaism

In the history and heritage of the Jewish people, the Hamsa evil eye symbolizes the presence of God n everything that is present in the world. The Jewish community believes that all the things that they see on earth are part of God’s creation to provide a beautiful place for people. The five-finger sign reminds the people to majorly focus on the five senses while praying to God. It is also believed that the Hamsa evil eye is related to the image of the hand in accordance of the five books of the Torah.

In whatever kind of religion, the Hamsa evil eye is usually used as a sign of safety and protection against evil thoughts, beliefs as well as actions, and to the people that have ill wishes. It is also a very good sign of good luck, confidence, strength, and abundance.

In the Middle East, the Hamsa evil eye amulet is believed to be the hands of God. The community in the latter place believes that the owner of the Hamsa can enjoy good health, happiness as well as good fortune.