Youssef Antoun Makhlouf was born on May 8, 1828, the youngest of five children. His parents, Antoun Zaarour Makhlouf and Brigitta Chidiac lived in the village of Biqa-Kafra, high atop the Lebanese mountains.

When Youssef was three years old, his father died leaving Brigitta a widow struggling to care for the five children. Youssef’s mother later remarried a man who became the parish priest of the village in which they lived.

Youssef grew up in a pious home, wandered the fields caring for the animals, and found joy in prayer and solitude at an early age.

Following in the footsteps of two of his uncles, Youssef left home to become a monk in the Monastery of St.

Maroun at Annaya at the age of 23. Upon his acceptance into the monastery, his name was changed to Charbel as he took on the name of an early martyr. He went through the expected studies, both theological and secular, and was ordained as a priest on July 23, 1859.

Returning to the Monastery of St. Maroun, Charbel settled into a monk’s life of devotion to the Lord and the Church.

Several years into his service, Charbel sought permission from his superiors to withdraw and live in solitude in Saints Peter and Paul’s hermitage, a small cabin not far from the monastery.

Since this permission would only be granted to the most pious of monks, Charbel continued asking for seven years.

His superiors only relented when, as a joke, a servant filled Charbel’s lamp with water rather than oil one night while Charbel was working deep into the night.

To the servant’s amazement, the water-filled lamp burned all night. When Charbel’s superiors heard about this and verified it for themselves, they felt that was a sign that Charbel should be granted his request to live in the small cabin alone.

So, after sixteen years of living in the monastery, Charbel moved to live in solitude

in the hermitage where he lived the remaining years of his life.

He lived in a rough, simple cabin that had poor heat and only the basic necessities.

In this cabin, Charbel would eat one meal a day which would be leftovers from the monastery.

He endured brutal winters with little heat, slept on the floor with a pillar of wood for a pillow, and excluded himself from any of the comforts of life that others were so quick to embrace.

This allowed him to focus on God through prayer and worship and live a life submitted to God. Charbel had an unusually devoted affinity to the Holy Eucharist.

He preferred to say daily Mass at 11:00 AM so that he could spend most of the morning preparing for the Mass, and the remainder of the day being thankful for it.

While saying Mass on one December day in 1898, Charbel suffered a stroke. A priest that was assisting during the service responded to help Charbel and had to pry the Holy Eucharist from his grasp.

Eight days later, on Christmas Eve of 1898, Charbel died. He was 70 years old. As was the custom of the monks, Charbel’s body was not embalmed, was dressed in the full habit of the Order, and was buried directly in the ground without a coffin.

Like many faithful monks, Charbel would have been left only to the annuls of history had it not been for the events after his death. After the burial, a bright light surrounded Charbel’s grave for 45 nights.

Many townspeople came out to observe the unbelievable light. After seeking the proper permission, the monastery had Charbel’s body exhumed and found the body had not even started the decomposition process.

Unusual on its own, the fact that a hard rain had fallen several times since he had been buried and that the body was found floating on a flooded grave filled with mud showed that the conditions should have actually quickened the process.

Yet, the body was found in perfect condition. From there, the body was cleaned, the clothes were changed, and Charbel’s body was laid in a wooden coffin and placed in a corner of the private chapel of the monastery.

Those working with Charbel’s body also noticed a liquid coming from the pores of the body after it was exhumed.

What was believed to be a mixture of sweat and blood, with a distinct odor of blood, continued to ooze from the body.

Because of this nonstop liquid excretion, the clothes on his body were changed twice a week. Several different professionals in the medical field examined the body and the fluid over the years and were amazed at the lack of decomposition and the continual flow of sweat and blood from the body.

In 1918, after an autopsy of the body, the body was left on a terrace for three months during the heat of the summer and still, no decomposition occurred and the liquid continues to be expelled from the body. 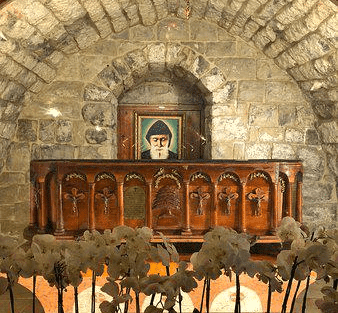 After an examination by two doctors from the French Medical Institute of Beirut in 1927, the body was placed in a zinc-covered wooden coffin and was placed in a specially constructed tomb.

Placed alongside the body was a zinc tube with special papers explaining what the physicians had found. The coffin remained in that special tomb for 23 years.

In 1950, a liquid was found to be seeping from Charbel’s tomb.

After going through the proper channels to receive the necessary permission, the coffin was once again opened with numerous witnesses and physicians attending.

Upon opening the coffin, the body was still intact with no decomposition and the fluid continued to flow from the body.

The zinc tube is the only thing that was corroded. For 67 years following his death, the body of Charbel Makhlouf remained preserved with no decomposition occurring.

By the time of Charbel’s beatification in 1965, the body had finally succumbed to the typical decay.

Today, the exuding of the fluid has stopped and only the bones of Charbel remain, though they are said to be of red color.

Charbel Makhlouf was a monk and priest who loved the solitude of prayer, the reverence of worship, the reflection of the Holy Eucharist, and the freedom of simplicity.

He sought God early in his life and lived the monastic vow until his death.

The Roman Catholic Church esteems this man as one that God used to tie the eastern expression of the church with the Church as a whole.

Saint Charbel  Known in our days mostly for The many miracles that happen around the world the Church chose two of them to declare the beatification, and a third for his canonization.

· The healing of Sister Mary Abel Kamari of the Sacred Hearts

· The healing of Iskandar Naim Obeid from Baabdat

·  The healing of Mariam Awad from Hammana.

· Nohad El Shami: An incredible number of supernatural occurrences have been ascribed to Saint Charbel since his passing.

The most popular one is that of Nohad El Shami, a 55-year-old lady at the season of the supernatural occurrence who was healed from partial paralysis.

She tells that on the night of January 22, 1993, she found in her Dream two Maronite Monks remaining beside her bed.

One of them put his hands on her neck and worked on her, relieving her from her pain while the other behind her back.

When she woke discovered two injuries in her neck, one on every side. She was totally healed and recovered her capacity to walk.

She Believed that it was Saint Charbel who recuperated her yet did not perceive the other Monk. The next night,

she again saw Saint Charbel in her dream. He said to her: “I did the surgery to let people see and return to faith. I ask you to visit the hermitage on the 22nd of every month, and attend Mass regularly for the rest of your life”. People now gather on the 22nd of each month to pray and celebrate the Mass in the hermitage of Saint Charbel in Annaya.

Some of the materials were taken from: